Faced with an Commission Challenge

﻿
﻿
﻿
﻿
If a purchaser of your work, likes it, they will often return for something else. Artists really like their repeat customers, as they get to built a relationship with them over time. It gives us a chance to learn what they might like.


This was the first mug rug a customer got in the summer and this fall the same customer asked if she could purchase another mug rug in similar colours. Well, I had the textile card below but as the motif was going for a man and he rather likes fishing, I decided those flowers wouldn't do. 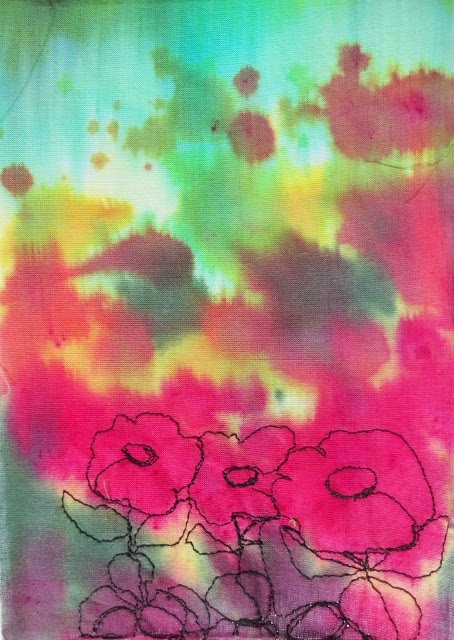 Of the red, gold and light green fabric, I only had one piece left unstitched and I thought I would like to use it. But how, oh how was I going to make it into a fishing scene??? I looked at it often over a matter of weeks and finally an idea just came to me. Instead of making very realistic fish, I would stylize them swimming under water. Once I had the idea, what fun it was to stitch in one fish and then then another and then another... Before I knew it I was ready to add the pieced work. What do you think? Very different from the poppies but equally as nice I think.


Posted by Watercolour and Textile Artist, Eileen Gidman at 3:01 PM

Love it! It's fun to do isn't it? Like finding figures in the clouds.

Yes, Win and Holly these were very fun to do. I always like a little challenge.

Hi Eileen,
The deconstructed screens are washed and ironed on the next post so stay tuned!!

As I was reading your post, it occurred to me how much fun you must have creating the final stories for these mug rugs.