Watercolour lessons with the TAPS Seniors and High School Students

Community Projects can be the best! Creston's Rotary are sponsoring a collaborative project between the Creston TAP (Therapeutic Activation Program) Seniors and some high school students. Although there is no snow on the ground we are getting into the holiday spirit! The group is painting Christmas Holiday images in watercolour, several of which will be reproduced onto Greeting Cards for sale. I was honored to be asked to oversee this worthy and fun project.
Here are a few pictures from the first two painting sessions. We are concentrating on the painting in this first picture but there is lots of joking between the two age groups which makes the intergenerational project particularly fun.

People's involvement is what makes these projects successful. Thank you Laura Leeder for giving us the holly, for inspiration and for donating some artist quality paper for the program. You can check out Laura's own lovely watercolour paintings here:  website .  Thank you so much to Claudette and Brenda for volunteering at the painting sessions. Stay tuned for an update on the progress of this project.
Posted by Watercolour and Textile Artist, Eileen Gidman at 9:23 PM 2 comments:

Creston Card and Stationery Store sells local artwork and it is time for me to get some new fall textile cards to them. I started by looking through my hand dyed fabrics for suitable colours for fall and adding heavy interfacing to the back. I work on a 4 1/2" X 6 1/2" size for cards which can be placed in a standard 5 X 7 frame if desired.
I was having trouble visualizing what to place on the fabric rectangles having been away from free motion stitching for a few weeks. At first I thought the red and yellow one might work for a flamenco dancer... What do I know about drawing flamenco dancers? Nothing, so thinking that might not work out, I decided to turned to something I have some experience in drawing. I got out my sketchbook from a recent trip to Europe and looked for images that would fit the fabric. That ignited the creative fire and I away I went. I can't wait to spend a few hours stitching tomorrow.

﻿
"It is best to paint what we know", was said to me by a talented local artist. That advice really worked for me today as I felt engaged with the chosen image. Can't wait to start again tomorrow!
Posted by Watercolour and Textile Artist, Eileen Gidman at 6:07 PM 6 comments:

Painting an Ever Changing Scene


Plein air painting always has the weather elements to consider especially the changing light. There can be other elements to consider as well such as I experienced with the above two watercolour sketches. With the landscape, I found it was possible to paint while moving if I just let go of the need to capture the scene exactly as it was. For me, I started with something that I found interesting for a focal point. After deciding where to place that focal point, I quickly sketched what I could see of it initially and then what I could remember of it. After that, I added other elements, as they came into view, that I thought would complement the watercolour sketch. Therefore the view was made up but I think it describes the essence of what we were seeing as we cruised the river on a recent trip.
Even sketching a stationary scene can have it's challenges such as when someone plunked themselves down right in front me when I was sketching and outdoor café scene. I just had to adapt, peak around them and add in details from memory. This type of sketching and painting might seem frightening or frustrating to some but I encourage you to at least try plein air painting. You might find it as rewarding as I do!
Posted by Watercolour and Textile Artist, Eileen Gidman at 9:48 PM 2 comments:

Crossing the Main river near the medieval town center of Wurtzburg is the 'Old Main Bridge' (Alte Mainbrücke) which now seemed to be only for foot traffic. The day I was there sketching, it was a lovely warm fall late afternoon and many locals were socializing over glasses of wine from nearby restaurants. Musician spaced themselves along the bridge providing entertainment. It was a magical afternoon and we were awed to think we were standing on a bridge built around 1500.
﻿
This Kappele Church, built in a Baroque/Rococo style, demands attention as it sits up on a hill overlooking the Main River near Wurtzburg, Bavaria, Germany. This medieval city had much of its architecturally beautiful buildings destroyed in the war. I found it interesting to learn that the rebuilding over the next twenty years was mainly done by women. They were known as 'rubble women' and rebuilt to historical accuracy.
That afternoon I met 3 other local artists and even if we weren't able to speak each other's language well we could still communicate through viewing each other's artwork.

Sketching with a glass blown ink pen from Wertheim, Germany

The light was so yellow yesterday that it made the fall colours look brilliant. I couldn't resist getting out for a couple hour sketching session in our garden with the new glass pen my sister surprised me with. I had seen them before under glass counter tops in art stores but had never had the pleasure of having one. It  gives a variety of lines and holds a lot of ink which is what an artist is looking for. Love it! 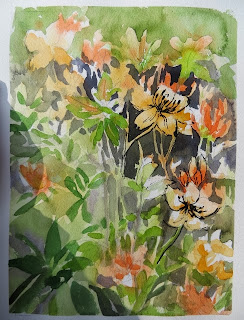 Here I am adding some ink lines to a watercolour painting I had started last spring. It was never finished because it hadn't developed the way I had envisioned. Working on a painting like this can be really freeing for experimentation. Sitting outside in the warmth of the afternoon sun, I added some black ink lines using my new glass pen.
In the studio this morning I decided to add some additional watercolour paint, toning down some areas and darkening some of the background to direct the viewer's eye through the painting. Winterwren birds frequent the area along the creek where this Azalea grows.
Posted by Watercolour and Textile Artist, Eileen Gidman at 10:54 AM 3 comments:

Painting while on the Danube River - Viking Cruise

From the top deck of the Viking Ship, Bragi, as we were docked  in the medieval city of Regensburg, I was able to quickly sketch one of the two royal palaces that helps to give Regensburg it's status as a registered Medieval City by UNESCO. The architecture of the city, dates from the 11th to the 13th century and includes ancient Romanesque and Gothic buildings.
The challenges of this plein air painting included facing into the sun as well as trying to finish as the ship was leaving the dock! I still love plein air painting for capturing the immediateness of the scene that my studio paintings might not.
﻿
Posted by Watercolour and Textile Artist, Eileen Gidman at 1:54 PM 3 comments:

Painting on the Danube, Main and Rhine Rivers


Watercolour sketches can capture a moment in time, I think, especially when having the opportunity to paint them on location. I had so much fun painting on this trip. Now looking at the quick paintings, I can remember what I was experiencing with some of my other senses. Hopefully it is the same for you. It was warmer the day I sketched the building in Bamberg than when I painted the vineyards. I think the colours chosen reflect that even though it was done unintentionally.
Check back later this week for more watercolour sketches/paintings of the  trip on the Danube, Main and Rhine Rivers. For those of you I met on this journey feel free to copy the paintings to your computer as long as you note myself, Eileen Gidman as the painter. For everyone else, enjoy the paintings and I hope it encourages you to take the trip.
Posted by Watercolour and Textile Artist, Eileen Gidman at 9:07 AM 1 comment:


Posted by Watercolour and Textile Artist, Eileen Gidman at 3:52 AM 2 comments: