Week 1: Painting in the Rocky Mtns

Day six today! The days, of the month retreat, are taking on a routine. Out painting by 9 for about 3 hours. Home for a warm lunch as the days have been very cold and some were rainy. Do you see the snow on the top of the mountain in my painting. That happened this week and there were even a few snow flakes in the valley! The afternoons include a rest period and finishing that morning's painting in the studio. The weather is supposed to be better this week, so the other artist and I plan on getting out a second time in the afternoons.  I might end up with a stack of paintings that need finishing!!! 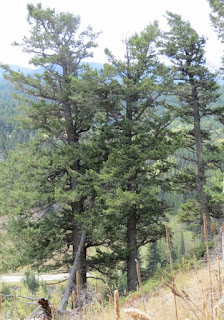 This is a photo of the view I was working on today. The watercolour painting is so far from being finished I won't post it. I like the way the tops of the trees show so much movement. I would like to capture that but don't think I have thus far. I'll let you know how it goes.

To Win a Watercolour Sketch painted in the Rocky Mountain Foothills: comment on my blog or Facebook posts during Sept 2015.  I will make the draw the first week in October. Good luck!
Posted by Watercolour and Textile Artist, Eileen Gidman at 7:29 PM

Beautiful work, Eileen! I keep pondering the idea of a full month to focus on one's art and I can't imagine how I would react to the possibility! I always enjoy seeing what you are working on and love that you so willing share your procedures. Thanks and enjoy your retreat!

It's a gem Eileen! Have a wonderful time, I look forward to seeing more of your paintings. I hope you get some warm, sunny days as well.

Eileen, Ivor just had a look at your painting and commented on how nice it is. You've captured the area as he remembers it.

What a fabulous painting, Eileen - those trees remind me of the tessalated patterns created by mosaic work, so I'd be going with Tree Tessalations for a title. And the way the tree on the right is dancing, Tree Tango would work too. It's terrific to follow your time there on your blog - delighted that you're posting!